From OutWorlders Wiki
Jump to navigation Jump to search

The purpose of this document is to serve as an archival record of the 2019 Planning Meeting held on January 12, 2019. 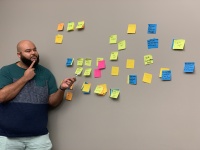 Eric contemplating the meaning of this Post-It, and where it should go.

OutWorlders held a planning meeting on January 12, 2019. Those attending were asked to individually write down some ideas of what they would like to see happen in 2019. Each idea was written on a Post-It note.

Next, everyone stuck their Post-It Note Ides to the wall where each idea was discussed. If an Idea seemed similar to other ideas, those notes were grouped together.

After a few hours, those attending were given three "points" to spend on ideas they'd like to focus on. There were no rules on how those points needed to be divided, so someone could spend all three of their points on one idea if they wanted to. Each person would draw dots on the Post-It Notes (or group of notes) they thought should be the top focus of the group.

Below is a tabular representation of those categories, the points the received, and the individual ideas that made up the category.

Note, The points are used to help determine focus and priority. An idea with 0 points means that the group feels as those they can wait until higher priority goals are completed, but that does not mean that they can't be done. For example, collaborating with groups received the most amount of points, while Theme Nights received none. However, those two ideas could support each other depending on what comes out of the collaboration meetings.

Ideas are sorted by number of Points, then alphabetically by Theme